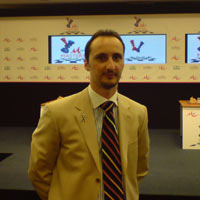 Many readers have requested the detailed rules of the Nanjing chess tournament that is going to take place December 10-22. Although there are no regulations on the official website, we have managed to collect the most interesting information through various sources.

Discussion and details in the forum

In the Nanjing preview we hinted the possibility that Pearl Spring is trying to become part of the Grand Slam. That possibility got yet another confirmed today by an official press release by Silvio Danailov. In front of BTA and Focus News he states, “The hosts have ambition to make the tournament annual and next year they will apply to be a Grand Slam member event.”

The last tournament for Topalov before the challengers match

Pearl Spring will be the last event of Topalov before the challengers match with Gata Kamsky. After the China event he will start the preparation for the match with his second Ivan Cheparinov.

The ex world champion is already on his way to China (with a transfer flight through Frankfurt). He will have a press conference the day after his arrival.