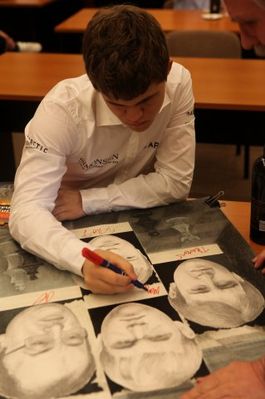 The live coverage of the Bazna Kings tournament starts at 14:30 CET. Today’s featured game will be between Magnus Carlsen and Ruslan Ponomariov. It will be commented live by GM Christian Bauer and IM Alexander Ipatov.

The other pairings of the day are Nisipeanu – Radjabov and Gelfand – Wang Yue and you can follow them with computer analysis here and here.

No draw agreement by the players are allowed before move 30.
Any such draw claim will be permitted only through the Chief Arbiter in the following cases:

* a triple-repetition of the position,

The final standing of the players will be determined according to points. In case of sharing of places – the following criteria will be decisive for the tie-break:

* A greater number of wins

* The result of the direct mini-matches between contenders

* In case the first place might be shared by more than two players – the final standing will be determined according to the criteria that have been mentioned above.