the norm takers from Kallithea 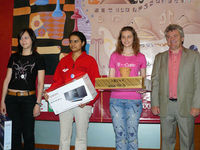 The European Chess Club Cup in Kallithea (Greece) finished with a beautiful closing ceremony on October 24. Besides the 12 sets of medals given to the winners of each individual and club category, many participants were able to achieve norms during the event.

IM Anna Muzychuk managed to grab gold medal on board 1 for her team T-Com Podgorica and a GM norm as well. Her good score gave T-Com the third place in the final standings in the strongest ECC in history.

IM Jon Ludvig Hammer gave the proof that the Norwegian chess is growing by taking a GM norm as well. He shared his thoughts in a video interview, which will be available later today on Chessdom.com.